The English UK Fair, Dead Sea Jordan 2012 took place at the Jordan Valley Marriott Resort & Spa from Tuesday 24 to Friday 27 April 2012. The workshop was organised by English UK in partnership with and supported by the British Council, UK Trade & Investment and VisitBritain. 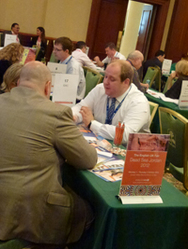 The programme of social events, seminars, and one-to-one appointments in a tranquil resort set alongside the world's largest natural spa gave educators and agents the opportunity to really get to know each other and develop long-lasting productive partnerships.

The Vartanii Ballroom, elegantly dressed in a 'candles and flowers' theme, provided the setting for the welcome reception and dinner. Guests relaxed and networked while enjoying a buffet of international and local cuisine.

An engaging interactive networking session started the second day. Delegates teamed together to produce SWOT analyses of the UK's English language teaching centre and discussed questions such as 'if studying English in the UK was an animal, what would it be'. A seminar programme followed with market information sessions for educators on Jordan and Oman. A parallel programme for agents included presentations from English UK, the British Council and English UK South West. The morning was completed with a Q&A with Erica Thurbon from the UK Border Agency.

After a productive afternoon of appointment sessions, delegates enjoyed an evening outside the confines of the resort with an evening tour of downtown Amman and a reception in the lovely gardens of the British Ambassador's Residence.

Once all the hard work was over on the final day, many delegates relaxed with a therapeutic mud bath and float in the Dead Sea. Rejuvenated educators, agents, exhibitors and guests then gathered for the spectacular 'White Nights' themed gala dinner on the Cascades Terrace, from where uninterrupted views across the Dead Sea to the lights of Jericho and Jerusalem beyond were enjoyed. 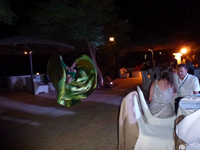 Marc Jessel, the British Council Jordan's Country Director, welcomed delegates and spoke of the importance of English as an international language and the quality of a British education.

Guests were treated to a traditional Arabic barbecue-style dinner and belly dance performance.

Delegates praised the overall organisation and programme, convivial atmosphere and business networking opportunities of the fair.

Steven A'Barrow from Harrow House International College commented, 'Superb organisation yet again by the English UK team. I loved the trip to Jordan. It was a great opportunity to get to know agents and competitors better during the follow on events. One of the most enjoyable business events I`ve ever been on. '

The study abroad agents were equally impressed. Fulya Yalezan Yilmaz of Test Education Centre in Turkey remarked, 'I like the fact that we spend the evenings together. It helps us to bond!'

After the fair, 23 delegates took part in an overnight Desert Highway tour to Wadi Rum and Petra. Their itinerary included visits to Mount Nebo and Madaba, a sunset Bedouin jeep drive in Wadi Rum and a walking tour in the footsteps of Indiana Jones in the ancient city of Petra. Guests camped under the stars in the desert at Wadi Rum, enjoying a traditional Bedouin meal and folk songs around the campfire.

The next English UK Fair for the region will be held in Beirut from Monday 30 September to Thursday 03 October 2013 at the Mövenpick Hotel & Resort Beirut. The programme will include a gala dinner at the historic Sursock Palace.As places are limited, we encourage you to secure your place early in order to avoid disappointment.

Full details and registration will go live online this month at www.englishukfairs.com.