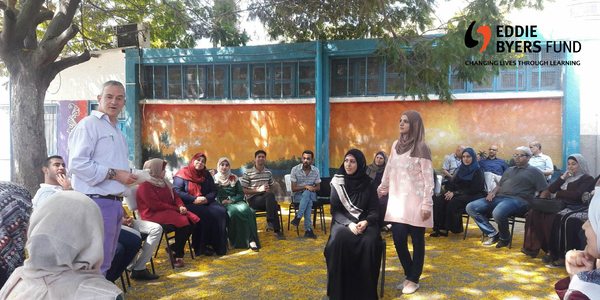 Using English is the best way to learn English – and collaborating to write and perform plays is probably one of the best ways of all.

Supporting Palestinian children and teenagers to create and perform their own five-minute dramas not only won the Hands Up project Eddie Byers funding for 2018, but also the British Council ELTons award for local innovation.

Charity founder and ELT teacher Nick Bilbrough says the project evolved from his short-term teacher training projects with the British Council, which had encouraged children all over to read through storytelling and drama. Now, around 40 teachers around the world give up time each week to read stories to around 300 children in groups thousands of miles away using technology such as Zoom.

Another part of the project involves a playwriting competition for Palestinian children, who have to write and video a five-minute play. Entries more than doubled to 180 after the Eddie Byers Fund supported a project to teach 180 school teachers in Gaza and the West Bank how to run extra-curricular drama clubs for mainly 9-15 year-olds.

"A lot of the plays entered for the competition last year came from the after-school drama clubs. It's a fantastic learning experience for kids to make a play in English: it's got everything in. There's language learning, speaking, reading and writing English, pronunciation, grammar – everything."

Thirty of the plays were published to raise more money for Hands Up, which also thrilled the winning authors, and Nick says the project has long-term impacts. "The drama clubs are now established in the schools, and they can often be performing their plays to people around the world using Zoom. Most children in Gaza never leave.

"I really believe this is one of the richest language learning activities you can do – it's not just the actors but everyone can be involved, whether it's learning lines, planning a performance – it's a learning experience. The children are very motivated to learn English because they love doing drama and a lot of them had never had drama classes as it's not part of the regular curriculum."