Meet Kawther Nasar, an alumni of the RefuAid 'Language: A Gateway' programme and member centre Wimbledon School of English. 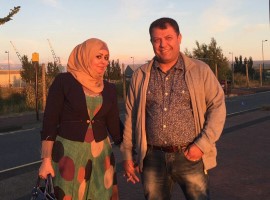 By the time you read this, Kawther will have had her much-wanted first baby and be thinking about applying for jobs as a doctor once her maternity leave ends.

She's come a long way since leaving Iraq four years ago to join her refugee husband Wisam Almadi, being ineligible for any public support but having to requalify to be able to practise here.

Settled in Cardiff with a new baby, her UK doctor qualifications and married to her "soulmate," life is rosy for Kawther, 32 – and much of that is down to the support she's had from RefuAid and one of its English UK partners, the Wimbledon School of English.

Kawther was already a qualified doctor when she left Iraq – this career was the dream of her father, a civilian who was killed while providing for his family during the country's civil war in 2004, aged just 45. But once in the UK, she struggled to pass the OET English exam, scoring just ten marks off the General Medical Council requirement of 350, with medical problems making it even harder for her.

Then a friend told her about RefuAid, the charity which supports refugees and asylum seekers to get the English skills they need to practice their professions or go to university in the UK, restoring their dignity and independence.

Kawther says: "I never forgot how they are so cooperative, compassionate with me, they listen to me very carefully and take care of me until I achieve my goal. I can't express how thankful I am for their help. My supervisor Alessandra was so cooperative, a lovely lady. She kept talking to me and convinced me with positive vibes that I can do it. She offered me a training course online, then Wimbledon School of English to improve my language. It was an amazing experience and they guided me to the end of tunnel! In addition to that they helped me in terms of emotional, training and money support."

Kawther is also grateful to Wimbledon School of English, where she studied online in 2020. "We were around eight doctors so we met everyday and did a task then we had discussions, I feel I had support when I joined them. I took my English qualification on November 2020 with a very high score, more than GMC needed."

Six months later – during a high-risk pregnancy - she took her medical exam entitling her to practise in the UK. "I'm eager to start again to practice medicine here in the UK as it's my dream but it may be after my maternity leave as I need to have sufficient time with my little one. I waited for this moment more than five years."

Kawther says her husband, who is working and studying for his PhD in civil engineering, was "with me in this tough journey hand by hand. I couldn't make it without his support and encouragement – he kept saying you are smashing it and you will make it soon to be a doctor here in UK." She was also inspired by the memory of her father. "I was thinking all time to say his daughter became a doctor not only in Iraq but also in the United Kingdom. It was my biggest motivator."

So far, Kawther has worked as a freelance medical interpreter, a mail sorter and as a Covid contact tracer.

She says: "I can't even put any comparisons between Iraq and here! I feel safe here as a lady. Without RefuAid's help I couldn't make it. I met people in RefuAid I won't forget for my whole life as they helped me and guided me to achieve my dream without asking for anything, it's for free. They helped me and gave me a loan to complete my study even though I'm not eligible to have anything from government.

I wish to all RefuAid staff all the best in this life and I hope they have a happy moment as I have."

"I'm so happy now as I feel comfortable and safe in this brilliant country giving us opportunities to achieve our goal in honest ways and with no discrimination at all."

More than 80 English UK centres have supported over 600 RefuAid clients to get the IELTS or OET qualification they needed since the charity was founded in 2015.