The first quarter of 2018 saw student weeks rise by 7.8 per cent over the same period the year before, according to the latest Quarterly Intelligence Cohort (QUIC) figures.

Comparative analysis is possible for the first time, as the scheme enters its second year, and it shows that junior weeks rose by 11.7 per cent and adult weeks by 7.4 per cent over the first quarter in 2017.

It also reveals the top markets in quarter one were Saudi Arabia and Italy, with Brazil entering the top three for the first time, and a small upward shift in the proportion of student weeks booked direct. 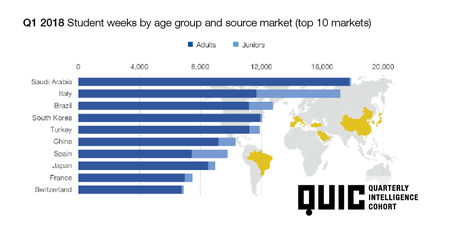 "It looks like more good news for our members, as they consolidate last year's recovery," said Roz Rozidor, who manages the scheme for English UK. "It's also great to see QUIC become even more useful to its members and the wider membership of English UK, as participant numbers rise and we are able to provide even more detailed information within weeks of each quarter's end."

QUIC, which launched in early 2017, is an optional scheme for English UK members who pay £240 a year, contributing their data but receiving a full 30-page report covering student weeks, age profile, regional analysis, booking information and relative importance of course type for each source market within eight weeks of each quarter's end.

An executive summary is made available to all English UK members several days later.

An extra 20 English UK members joined the scheme this year, bringing numbers up to 144 and helping the scheme to develop further the market insight it provides. It is too late to join for 2018 but if you are interested in taking part from January 2019, contact Roz Rozidor.