2012 is a really big year for the UK, and visitors will find lots going on.

The biggest events are the Olympics and Paralympics, which begin in August. There is also a Cultural Olympiad with a focus on Shakespeare being held throughout the country before the sporting event, which includes the London 2012 Festival which runs from 21 June to September 9. The Queen celebrates 60 years on the throne in June, and there are several special events in London including a river regatta. Everyone gets an extra public holiday too.

Below is English UK's guide to some of the major events and exhibitions being held in the UK from July till September.

Sport: Olympic Games - from 27 July to 12 August. Keep an eye on the London 2012 website for public events such as the Marathon run through London www.london2012.com. Golf - the British Open Championship is being held from 19-22 July at The Royal Lytham & St Anne's Golf Club, Lytham, England. The British F1 Grand Prix will be held at Silverstone 6-8 July.

Exhibitions: Shakespeare Staging The World - the world of Shakespeare and the way London emerged as a world city will be held at the British Museum, London, from 19 July to 25 November.

Events: World Pride -  this is billed as the biggest lesbian and gay Pride event ever, and is taking place on 7 and 8 July in London. This includes a parade, a street party and a family event. Details: www.pridelondon.org/bigday/worldpride.

Music: Daniel Baremboim starts playing his way through Beethoven at the Royal Albert Hall in London from July 27 at the start of the Proms concerts. The Proms run from 13 July to 8 September. Details: www.bbc.co.uk/proms. Rihanna's only confirmed British date for the year is at the Wireless Festival in London's Hyde Park on Sunday 8 July.

Dance: American choreographer Elizabeth Streb is known for creating very physically challenging dances. Every day in July Streb and her dancers will be performing somewhere in London from daybreak until late at night.

Events: Film director Alfred Hitchcock, best known for films like Psycho, Vertigo and Rear Window, is celebrated in a major event at the British Film Institute in London from August till October. All 58 of his films will be shown including nine of his silent films. 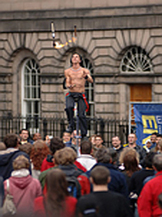 Art: Pre-Raphaelites:Victorian Avant-Garde opens at the Tate in London on September 12 and runs till 13 January 2013. This exhibition looks at a major British art movement and contains beautiful paintings.

Events: Shoreham Airshow including Battle of Britain scramble and support from the Royal Air Force, 1-2 September.

Fly To The Past including a Rock to the Past concert and the Oxford Festival of Flight. Oxford Airport, 1 and 2 Setember. Find our more here.

Northern Ireland International Airshow including a performance by stunt team The Red Arrows on 8 and 9 September.

The Great River Race - annual reiver marathon race involving 300 crews to find the Traditional Boat Champions. Expect to see all sorts of boats, with all sorts of crews. The race, on 15 September, is likely to start at around 10.30 at Millwall Riverside, London E14, go through central London, and end in Richmond.

Pearly Kings and Queens Harvest Festival - if you are in London on 30 September, try to see this. The Pearly Kings and Queens are a London tradition where each area had a "Royal Family" with special suits covered in pearl buttons. The families did lots of work for charity. Now the main event is this harvest festival, which starts at Guildhall Yard before a parade to St Mary-le-Bow church at 3pm.

The Great Gorilla Run - do go along to this for a laugh. It's a 7k fun run round London where all the runners wear gorilla suits. It's to raise money to save gorilla habitats and will be held on 22 September. www.greatgorillarun.org

The Braemar Gathering - ever heard of traditional Scottish sports like tossing the caber? You'll see them here, with large crowds and usually the Queen. The Gathering is always held on the first Saturday in September at Braemar in Aberdeenshire, Scotland.

Music: Wagner's Ring cycle will be performed in its entirety at the Royal Opera House in London from 24 September to 2 November.

Coming up in October and beyond...

Disney's Fantasia is live in concert at the Royal Albert Hall on 21 October; the new James Bond film Skyfall opens on 26 October; and the London Jazz Festival opens in November.